King Henry was to be the only English sovereign to be crowned both King of England and King of France. Indeed, it was the urgent requests of his uncle John, Duke of Bedford, to have the boy king brought over to France to be crowned there, that persuaded the Council to have Henry crowned first at Westminster just shy of his eighth birthday. Great preparations were made for the only journey Henry was ever to make across to his French kingdom. He would be accomplanied by an impressive court and entourage, since it was hoped by Bedford that the King's presence and his coronation might whip up loyalty and enthusiasm amongst his French subjects. This had become ever more urgent after Joan of Arc had succeeded in having the Dauphin crowned as Charles VII in the coronation church of Rheims in July of 1429. Troops were raised not only for the King's escort and protection, but also as reinforcements for the English already serving in France. Ships and crews were recruited for the royal crossing to Calais.

Henry crossed from Dover to Calais on St. George's Day, 23 April 1430, with a fleet of forty-seven ships, most of which sailed in fact from Sandwich. His expedition consisted of 1,200 lances and 3,500 archers, and he was accompanied by Cardinal Beaufort, the dukes of York and Norfolk, Warwick and six other earls, eleven barons, and the bishops of Bath and Wells, Ely, and Rochester. His personal entourage numbered  some 300, including his physician John Somerset, five additional surgeons and 182 household servants. He landed about 10 o'clock in the morning and rode firstly to the church of St. Nicholas (his birthday saint) to hear Mass and give thanks for a safe crossing. However, the surrounding French countryside was anything but safe, and Henry and his court were kept in the security of Calais for the ensuing three months.

Rheims was, of course, out of the question, and Bedford planned to have his nephew crowned in the cathedral in Paris instead. While still in Calais, the news arrived of the capture of Joan of Arc, which gave English morale a great boost. The King finally left Calais on 17 July and made a cautious twelve days' progress along the coast and up the river Seine to Rouen, which he entered on 29th July. He was to remain there for the next year and a half, until Bedford deemed Paris and the surrounding countryside sufficiently secure to move the precious person of the young king up to the city for his coronation. While at Rouen, Joan of Arc was tried and executed there. Henry was not party to this judicial vengence, and indeed he never set eyes on the Maid of Orléans. He undoubtedly accepted that she was a witch and a relapsed heretic as he was told by his advisors, including French clerics. The capture of Louviers in late October decided Bedford that the route to Paris was now safe, and King Henry appears to have departed Rouen with Warwick and his court around 20 November. Whether his entire household accompanied him or whether some remained behind in Rouen is uncertain. He reached the abbey of St. Denis to the north of the city on 30 November, where he rested for two days. His formal entry into Paris was planned for the First Sunday of Advent on 2 December.

Henry entered Paris by the St. Denis gate at nine on the Sunday morning, dressed in a gown of cloth of gold and mounted on a fine white horse. He was escorted by the city dignitaries in their scarlet robes with blue hoods, and he was proceeded by 25 heralds and 25 trumpeters, as well as by Cardinal Beaufort and the Duke of Bedford. The procession included the bishop of Norwich, the young duke of York (now 20 years old), the earls of Warwick, Salisbury and Stafford, French bishops including those of Paris, Beauvais, Thérouanne, Noyon and Evreux, as well as various French nobles. Philip Duke of Burgundy was not among them. Already in secret negotiations with Charles VII, he diplomatically avoided presenting himself to Henry throughout his extended stay in France. Henry passed an array of tableaux, pageants and miracle plays as was usual at such royal processions. He greeted his grandmother Queen Isabeau at the window of the Hotel St. Pol by removing his hood and bowing. He was taken to the Hotel des Tournelles, which Bedford had vacated for his use, where he rested and dined. In the afternoon he paid a courtesy visit to his grandmother in St. Pol. They met as strangers, and one wonders whether Henry had been coached in appropriate French phrases, because he does not appear to have been at all fluent in that language at such an early age. The next morning he moved out of the city to Vincennes, a strong castle, but one of unhappy associations being where his father had died nine years before. He did not return to Paris until the day before his coronation.

He returned to the royal palace on the Ile de la Cité, from where he walked on Sunday morning, 16 December 1431, the short distance to the cathedral of Notre Dame. The royal canopy of blue and golden fleur-de-lis, under which he had ridden on his formal entry, was again held above him by representatives of the guilds of Paris. A raised platform with steps painted in blue with gold fleur-de-lis had been constructed in the cathedral, but the coronation was not to make the favourable impression on the French, which Bedford had intended. Firstly, Cardinal Beaufort not only celebrated the Mass, but performed the actual coronation. The bishop of Paris, whose cathedral it was, was relegated to an subsidiary role.  Henry was anointed and crowned, sitting on an improvised throne on the platform, while a second crown was held before him to signify his English title. To add to the discontent, officers of the household had taken the silver-gilt flagon belonging to the cathedral chapter, in which Henry had made the offering of wine for the Mass. The canons retrieved it only after a costly law suit before the King and Council. The banquet also caused criticism. People had been admitted to the great hall of the palace to admire the scene, while the coronation was in progress. There had been theft of food from the tables as well as of more valuable items, and the guards had failed to clear the hall, so that many guests had difficulty in finding a seat at the banquet. Henry sat at a large marble table between the cardinal and the bishop of Beauvais, with English and French lords on either side. The food at the royal table was undoubtedly excellent, but the food for the lesser orders received much harsh criticism, some of the meats having been cooked four days before! The following day there was a small jousting tournament held at St, Pol, but the Parisians complained that there had been neither an amnesty for prisoners nor a remission of dues and taxes. No royal largesse. Paris had presented the King with a gold chain and a jewel studded collar, but had received little in return. (Bedford had given his nephew a ruby ring on the day of the coronation.)

On 21 December Henry attended a session of the Paris parlement together with Bedford and the cardinal. After Mass in the great hall of the palace, the chamber du parlement, the members swore allegiance to Henry as King of France. Henry surprisingly acknowledged their fealty in English, leaving Warwick to express his thanks in French.  All in all, it had not been very well managed.

On 27 December Henry returned to the abbey of St. Denis, from where he moved down river back to Rouen in the New Year. After a short stay in Rouen, he journeyed north again to Calais and then departed safely for Dover on Saturday, 9th February 1432. 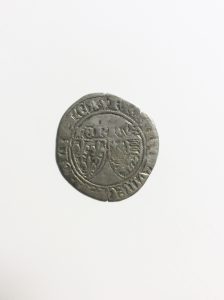 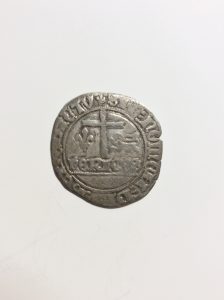