The cult surrounding the last Lancastrian king was more than welcome to Henry Tudor, who soon petitioned Rome for the canonisation of his saintly half-uncle. He also began to rebuild and enlarge the Lady Chapel in Windsor to make a more appropriate house for King Henry's tomb and shrine. He even intended that he himself would be buried there, but in late 1497 Henry VII changed his mind and decided to transfer Henry's remains from Windsor to the new Lady Chapel he was constructing at Westminster Abbey. This provoked a dispute between Windsor, Westminster and even Chertsey over the rights to house the "royal saint". Arguments and testimonies were gathered for adjudication before the Privy Council, and in March 1498 they found in favour of Westminster. A large elaborate altar-tomb was designed, with shields in Gothic lozenges around the sides and all hedged about by a structure of Gothic tracery on four corner columns. In the upper half were pedistals for statues of King Henry and angels or Saints. The design is preserved in the collection of the British Library (MS. Cottonian Augustus II.i. -- and reproduced on page 69 in S. Angelo: Images of Tudor Kingship, 1992). 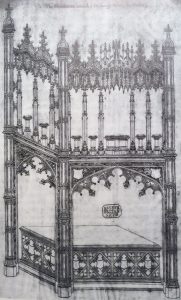 Of course, this project was never realised. The canonisation process slowed, and after Henry VIII's breach with Rome, it lapsed altogether. The Westminster Lady Chapel now bears the name of King Henry VII and his own impressive tomb together with that of his Yorkist wife occupies pride of place within it. Henry the Sixth remained buried at Windsor and his tomb was still to be seen there as late as 1598, but in 1611 John Speed reported: "the Tomb is removed, and where the Corpse is now laid is not vulgarly known." The King had been buried under the second arch on the south side of the choir. This was now used as the side entrance into the choir itself. 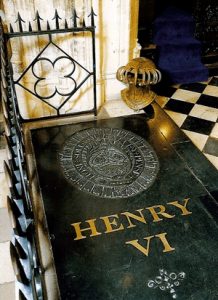 Visitors today see a black marble slab with a crown encircled by the Garter and the King's name inlaid in brass. It was placed on the right hand side of the high altar opposite the tomb of Edward IV in 1790 by order of George III. The pilgrims' collection box and the helmet from the original monument are still there to be seen. There is, however, no vault under this tombstone, and King's remains still lie further west under the second arch. The reason for this somewhat strange decision is certainly the fact that the site of the former monument over the King's vault had become a side entrance to the choir, thus necessitating the positioning of King George's commemorative stone up closer to the altar.

In January 1910 a tentative search for the King's grave was made , locating a vault under the second arch, where tradition had always placed Henry's tomb. With permission of the new sovereign, George V, a detailed examination of the site and its contents was conducted on 4 November that same year. The findings were published in 1911. (The report of W.H. St. John Hope, M.A., was published in the Society of Antiquaries' volume "Archaeologia" Vol. 62, Pt. 2, 1911, No. XXIV, pp. 533-542.) Representatives of the chapel and chapter, as well as the provosts of Eton and King's were present. They found a sealed leaden casket, which had been contained in a wooden coffin, since decayed. Dr. A.  Macalister, Professor of Anatomy in Cambridge University, made the following evaluation of the remains:

The following report contains all the Iiformation gathered from the skeleton which I examined yesterday.

The bones were those of a fairly strong man, aged between forty-five and fifty-five, who was at least 5 ft. 9 in. in height (he may have been an inch taller, but I give the minor limit).

The bones of the head were unfortunately much broken, but as far as they could be pieced together they were thin and light, and belonged to a skull well-formed but small in proportion to the stature. Some of the roof bones (occipital and temporal, frontal and parietal) had become ossified together at the sutures. The few teeth found (second molar upper right, and first molar upper left, second bicuspid lower right) had their crowns very much worn down. The portion of the one side of the lower jaw found had lost its teeth some time before death. There were nearly all the bones of the trunk, of both legs, and of the left arm; but I found no part of the right arm.

From the relative positions occupied by the bones, as they lay in the leaden casket when opened, it was certain that the body had been dismembered when it was put in. If the body had been buried in the earth for some time and then exhumed, it would account for their being in the condition in which we found them. It might also account for the absence of the bones of the right arm, as well as for the accidental enclosure of the left humerus of a small pig within the casket.

I am sorry that I can add nothing more. The state of the bones was so unsatisfactory that I could not make any trustworthy measurements.

St. John Hope continued: "Professor Macalister does not mention that the Contents of the box were still somewhat moist possily on account of the 'spices' used to embalm the body at its first burial. One other feature was noticeable, that to one of the pieces of the skull there was still attached some of the hair, which was Brown in colour, save in one place where it was much darker and apparently matted with blood."

After reviewing the Information from the chronicles, etc., St. John Hope concluded: "There can, then, be no doubt: